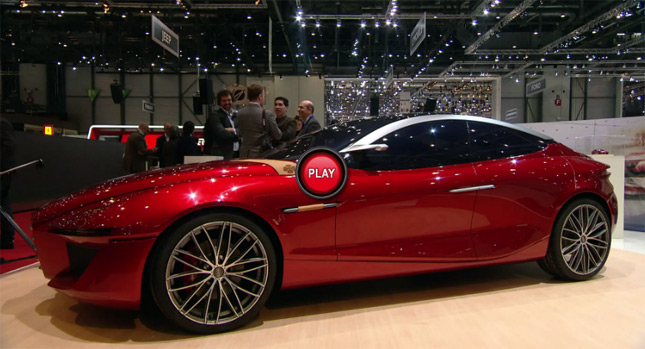 If we are to believe the design minds at the Istituto Europeo di Design of Turin (IED Turin for short), the Gloria concept is everything that North American and Asian consumers want from a modern Alfa Romeo sports sedan.

We'll leave that for you to decide after you take a look at the following walk-around video of the Gloria concept shot from IED Turin's Geneva Motor Show booth, courtesy of AutoMotorunSport magazine.


- Hyundai Passocorto Mid-engine Sports Car Concept By Ied For An Alfa 4c Rival Looks The Tits
Italian design studios still have that magic wand when it comes to creating impressive-looking cars, no matter the ethnicity of the people they employ. I mean, just look at this new Hyundai concept for an Alfa Romeo 4C competitor from the Istituto Europeo...

- Ied Graduate Crafts V12-powered Nissan Kaze Barchetta Study
One of the IED Master Team members who worked on the impressive Alfa Romeo Gloria Concept displayed at the 2013 Geneva motor show in March has come up with his own project for a track-focused Nissan sports car with a Barchetta-style body named the Kaze....

- Ied's Alfa Romeo Gloria Is A Concept For A Sporty Looking Sedan
As far as static concept cars go, there is only one thing they have to do, and do well: look good and attract attention, in order to consolidate a particular brand's image. One such example is the Instituto Europeo Di Design or IED-designed Alfa...

- Video: Ied's Abarth Scorp-ion Sports Coupe Concept At The Geneva Motor Show
If the rumors are true, Fiat's Abarth division may soon get its own version of the Alfa Romeo 4C mid-engined coupe, but for now, fans will have to make do with the SCORP-ION sports coupe study that was unwrapped at this week's Geneva Motor Show....

- Tesla Eye Compact Ev Concept By Ied Turin Set For Geneva Debut [with Video]
The EYE is a conceptual study by Italy's IED Turin in collaboration with Tesla Motors for a sporty C-segment hatchback model with an all-electric drivetrain. Designed with European and Asian consumers in mind, the EYE will have its world premiere...