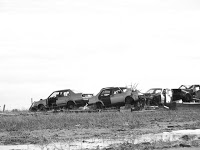 Perhaps 200km yesterday around the western part of Prince Edward Island. The propensity in rural parts of the Island for choosing GM, Ford, and Chrysler products was relatively surprising. One average town showed me two Japanese cars. No other car was anything but domestic American. We drove to the northern most part of the Island to feel carbon neutral, with the sight of a couple dozen wind turbines along with the sight of fuel gauge in the V6-engined vehicle dropping. Ice flows took the place of meeting tides. Snow was melting quickly and the grass will soon begin to grow green, but we had the ability to walk out for dozens of metres onto the ocean.

Some vehicles had begun their chemical breakdown, as UV, saltwater, red dirt, and animals had their way. The local Tignish Shore Volkswagen museum displayed a lovely quartet of Jettas, as seen at right.


- August 2015 Two-month Update: Long-term 2015 Honda Odyssey Ex
Two months have passed since we took possession of our own 2015 Honda Odyssey EX.  This isn't some perk associated with working in the automotive industry. We're paying for the Odyssey with our own money.  Last month we nitpicked...

- Goodcarbadcar.net Photography V
Although you may not have guessed, The Good Car Guy is technically on "vacation" in Prince Edward Island this week. That didn't stop there being Gallery posts on Monday or a Sales Stats article yesterday. However, it meant much of yesterday was spent...

- Woman Rams Car Into Law Courts In P.e.i. - What Kind Of Car Is It?
Prince Edward Island is Canada's smallest province, connected to the mainland by the Confederation Bridge or Northumberland Ferries. Fewer than 150,000 people live on the island, famous for Anne of Green Gables and potatoes. It's a peaceful place....