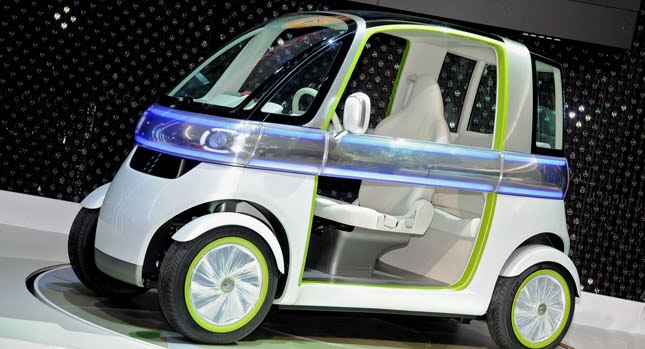 The third Daihatsu concept model that made it to this year's edition of the Tokyo Motor Show is the PICO, a futuristic proposal for a diminutive two-seater EV commuter positioned between small cars and motorcycles.

At 2,400mm long, 1,000mm wide and 1,530mm tall with a wheelbase of 1,830mm, the Daihatsu concept is much smaller than the Smart Fortwo, yet it has space for two passengers sitting in tandem-style.


- Daihatsu D-base Concept May Preview Next-generation Mira Kei Car
Daihatsu will present no less than four design studies at the Tokyo Motor Show later this month and the first one to be previewed is the D-Base Concept. Read more Â»...

- Daihatsu's Funky Little D-x Roadster Can Be Anything You Want
For this yearâ€™s Tokyo Motor Show, Daihatsu brought along an innovative new concept for a multi-purposes kei car series called the D-X ("d-cross"). While the car shown at the Japanese brand's booth is a two-seater roadster, Daihatsu...

- Drive It, Don't Wear It: Daihatsu Fc Sho Case Fuel Cell Concept
Daihatsu's Tokyo Motor Show lineup of tiny concept models is growing with the addition of the FC Sho Case study seen in these pictures. The Japanese company says it's an extremely compact and eco-friendly proposal that employs a next-generation...

- Daihatsu Imagines A Small Concept Car That Can Transform Into Many Different Models
With the 2011 edition of the Tokyo Motor Show just around the corner, the remaining participating automakers are throwing down their cars. Toyota-owned Daihatsu has released initial details on a new small concept model named the D-X. What's interesting...

- Tokyo Show Preview: Suzuki's Toy-like Q-concept Electric Mini Car
For those of you that found the Suzuki Regina that we showed earlier today, a bit too down to earth for a Tokyo Motor Show concept, the Japanese automaker has another study up its sleeve. Of course, there's the argument that the Q-Concept looks more...