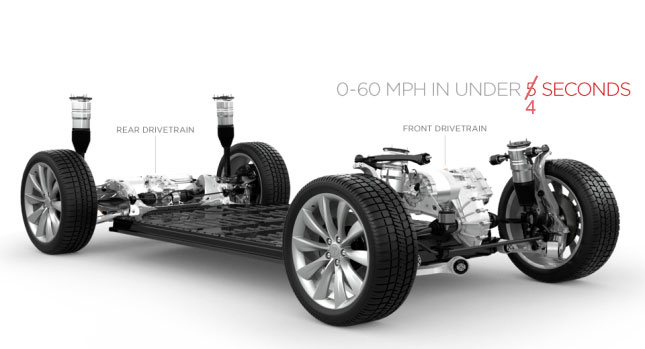 For the Tesla Model S to truly make a hit in current US market it needs to be offered with all-wheel drive - it's as simple as that. All manufacturers are aware of the appeal of extra traction in colder climates, and Tesla wouldnâ€™t mind a boost in their sales either.

Now, The Verge reports that the Silicon Valley-based manufacturer is actually readying an all-wheel drive model, which it will sell as the very top of the line. This makes us think of the all-electric Mercedes-Benz SLS, which is also all-wheel drive and as Chris Harris found out, it uses the advantages of this type of drivetrain to great effect.

- Report Says Next Mercedes E63 Amg Could Be Offered Exclusively As Awd
Mercedes now offers its E63 saloon and estate as both rear- and all-wheel drive (outside the US). The move undoubtedly increased the modelâ€™s appeal, especially for buyers in cooler climates, but now it seems Mercedes is tempted to ditch rear-wheel...

- Tesla Ceo Elon Musk Teases "update Details" For Roadster
If anything, Elon Musk knows how to play the media game. Well, we wouldnâ€™t expect anything else from the charismatic CEO of the Silicon Valley-based Tesla Motors thatâ€™s vying for the top spot as an electric vehicle manufacturer. Read more...

- Mercedes' Parent Company Daimler Acquires 10% Stake In Tesla Motors
Turns out that the yesterday's rumors were spot on as Mercedes-Benz' parent company, Daimler AG, announced today in a press conference in Stuttgart that the German firm has acquired an equity stake of nearly 10 percent of Tesla Motors. The two...