Lamborghini Indomable Study Merges Gallardo and F-22 Fighter Into One 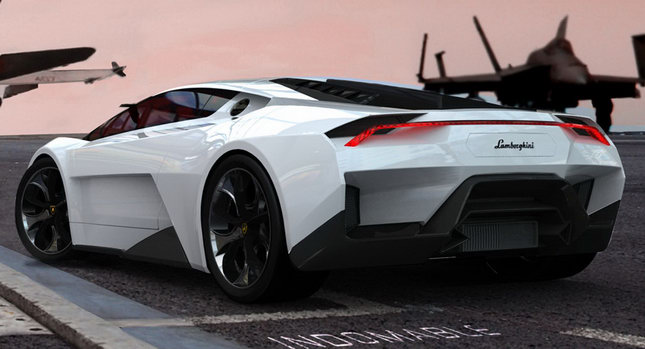 Under the supervision of Filipo Perini, head of Lamborghini Centro Stile and designer Alessandro Salvagnin, Ochoa and Albilares were tasked with creating a design study based on the existing Lamborghini Gallardo's wheelbase.


- Luc Donckerwolke Takes Over Bentley's Design Division
Luc Donckerwolke, the man responsible for the styling of many Lamborghini models of recent times such as the Gallardo and Murcielago as well as plenty of Seat vehicles including the IBE and Tribu studies, has been named new Director of Design at Bentley...

- Lamborghini Cnossus Concept Design - What Do You Think?
This here is the Lamborghini Cnossus, a design study for a supercar concept named after the ancient Greek city of Cnossus (Knossus) on the island of Crete. The eye-catching Cnossus was designed by Russian student Victor Filipchenko with the help of his...

- Lamborghini Super Trofeo Gallardo Lp560-4 Racing Series: 17 High-res Photos
Following in the footsteps of its Porsche and Ferrari rivals, Lamborghini today announced the "Lamborghini Blancpain Super Trofeo", a one-make racing series that will kick off in May 2009 featuring a lightweight version of the Gallardo LP 560-4. For the...